Prayer is Not Enough

Home / Prayer is Not Enough

Prayer is Not Enough

Pray without ceasing does not mean pray in place of acting.

No matter what you are called to, or what you strive to accomplish, prayer is not enough. Don’t get me wrong: Prayer is important. In fact, prayer is essential. But if all you do is pray, and sit back waiting for God to do all the work, you do not really understand the character of God, the gospel, or what it means to be called by God.

Before you right me off as some spiritual scrooge, let me explain. I grew up in a charismatic church that was passionate about worshiping God. We had all night prayer meetings, times of fasting, and passionate, wonderful evenings of worship seeking God’s face. I remember falling asleep as a young kid, under the pew while the adults prayed and worshiped God with fervor. Not all my memories of that church are wonderful, but the sincerity and passion they brought to worship was one of the best parts. Prayer was taken seriously and that was a good thing.

Prayer is essential to the Christian life. Without prayer, we behave as deists, who believe in a god who is an absentee landlord, not the God of the Bible. The absence of prayer only proves that we don’t believe we are in a relationship with God. For how can you have a relationship with one you do not converse? It is impossible. In fact if you want a surefire way to destroy any relationship, just stop communicating.

The lack of prayer in any Christians life is a sign that something is seriously wrong. It may be a sign of bitterness to God or a sign of soul crushing shame, but the absence of prayer is never healthy. Prayer is where we become intimate with God, and He with us. There is nothing you can say that will shock Him, and nothing you can say that will make Him love you less. He longs to spend time with you, even when words fail you. I was reading with my son in the book of Romans this week, and was reminded of how God promises that when words fail us, His Spirit will interpret our souls groanings as we cry out to God. (Romans 8:26-7)

Prayer is a lifeline for you soul and a sign of spiritual health. If we are going to learn to love Jesus deeper each day, to grow in the faith and to bear spiritual fruit, prayer must be a precious part of our daily life. How can we learn more about God if we do not read His Word? How can we be intimate with God if we do not spend time in prayer pouring our hearts out to Him. Prayer is the native tongue of the Christian life.

The Limit of Prayer

Prayer is essential and a great start, but the Christian life requires more than faith and prayer. It requires obedience and action. We have all heard the verse from the book of James in the Bible where he says, “faith without works is dead.” In this passage we could replace the word ‘faith’ for the word ‘prayer’ and it would have the same conclusion. ‘Faith alone’, and ‘prayer alone’ both fail the test. God calls us to follow his calling wherever it may lead. He may lead into hostile territory like my friends who are missionaries in dangerous places. He may call you to stand up to leaders who oppose Christianity and Christians right in your home city or village. He may call you to step out in faith regarding your next film production, video game or artwork installation.

Actions must accompany our prayers as we work out our salvation with fear and trembling (Philippians 2:12). Consider this passage in James:

20 You foolish person, do you want evidence that faith without deeds is useless? 21 Was not our father Abraham considered righteous for what he did when he offered his son Isaac on the altar? 22 You see that his faith and his actions were working together, and his faith was made complete by what he did. 23 And the scripture was fulfilled that says, “Abraham believed God, and it was credited to him as righteousness,” and he was called God’s friend. 24 You see that a person is considered righteous by what they do and not by faith alone.

25 In the same way, was not even Rahab the prostitute considered righteous for what she did when she gave lodging to the spies and sent them off in a different direction? 26 As the body without the spirit is dead, so faith without deeds is dead.

The Temptation to Focus Only Prayer

There is a dangerous vein within the Christian community that wants to shrink back from the courageous actions God is calling them to take. Rather than step forward like Abraham, willing to sacrifice the most precious thing God had given him, we shrink back and replace obedience with longer prayers. Don’t misunderstand me. The prayers should always be present, but our obedience must accompany them. As the French philosopher Etienne Gilson said, “piety is no substitute for technique.” Piety is wonderful, but it is a poor substitute for wise strategy and obedience.

We may be tempted to opt for the easy road of pietistic prayer instead of the hard and dangerous work of rebuilding the temple, while we may be under attack, like Nehemiah. We may opt for all night prayer vigils when God is calling us to be a Gideon, leading God’s people to conquer evil. Imagine if the man after God’s own heart, King David, quit fighting for God’s people and only sat in his palace all day praying. Imagine if King Solomon quit using his wisdom to judge wisely and govern his people so that they flourish. Imagine instead that he retreated to his bed chamber 16 hours a day for prayer, every day, for years. It is absurd and would have led to the crumbling of all God used him to build. Prayer is not our only tool in the spiritual toolbox.

James uses Abraham to show us that prayer is not enough. We must also be obedient to do what God is calling us to do. Like my seminary colleague Mike who went to be a missionary in Siberia. He didn’t go because it was easy, beautiful, or had a great retirement 401k. He went because God called him. He counted the cost, and he and his wife moved to the dark, cold and frozen tundra of Siberia. He is a man of prayer, but his prayers accompany his ‘faith in action’, they do not replace his ‘faith in action.’

Examples From Scripture to Imitate

Esther prayed and then risked her life to be obedient to God, rescuing God’s people.
David prayed and then risked his life to fight Goliath, rescuing God’s people from the Philistines.
Jesus prayed in the garden of Gethsemane and died on the cross to rescue you from slavery to sin.
The Apostle Paul prayed for both Jews and Gentiles and risked his life to spread the gospel, being imprisoned and stoned countless times.

Live in Obedience, with Confidence

These are the stories of the heroes of the faith, and the sacrificial love of our savior. Why would we ever suspect we are called of less, and why would we think God has called us to something less courageous and less glorious? He doesn’t. It is the enemy that wants you to shrink in fear, and hesitate when you should move forward in obedience.

We live in interesting times. Our country and our world are being disrupted and this disruption will not end anytime soon. We should pray daily to God, “maranatha, come Lord, quickly.” At the same time we should use all our mind, soul and strength to worship God by our actions. This includes stopping evil where we encounter it, loving the widow and the orphan, seeking justice based upon godly principles, seeking to build societies where the citizens can flourish, and remaining faithful to our King, whether in word or deed.

Whatever comes in your culture, do not back down from your faith inch by inch and pretend that your prayer life is a counterbalance to your lack of faithful actions. Each of us are called uniquely to serve Christ in unique places, but we are also all called to count the cost. May we be wise, seeking His face in prayer every day, and may we be found faithful when we are called to action. 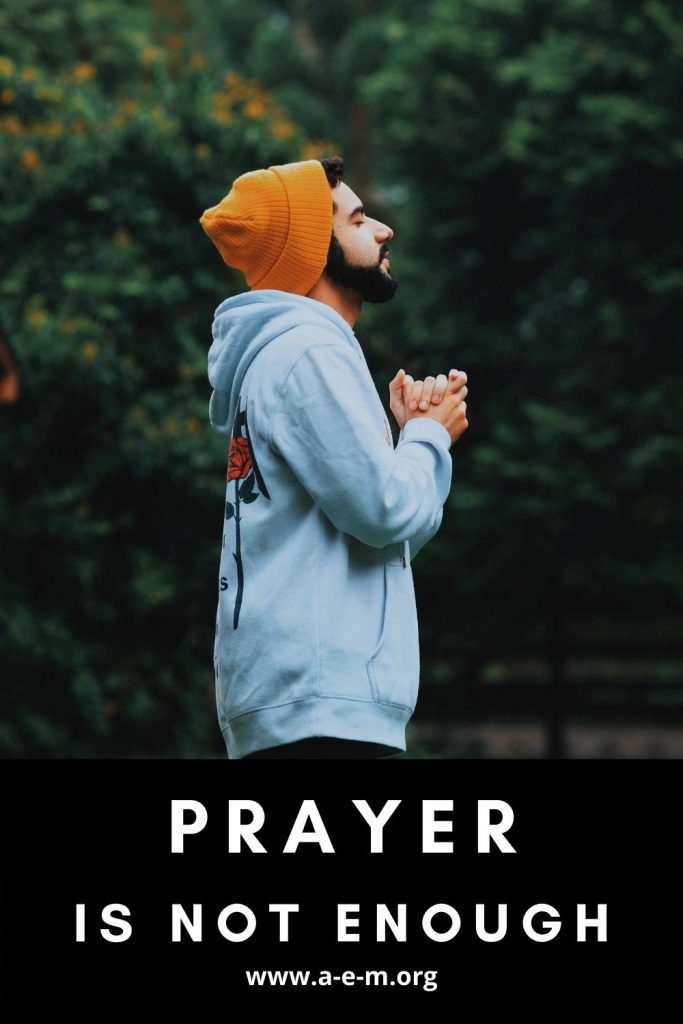 5 comments on “Prayer is Not Enough”