How did you start making art, and why? 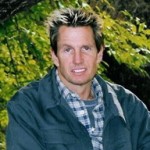 Tommy: The first art I made was when I was about five years old. I started with a pirate’s flag because I wanted to be a pirate. That was my first piece of art. But even though God had blessed me with talented hands, trying to get your parents to pay for art school is pretty much not going to happen. So I studied restaurant management and got into food art, like garde manger. After the accident in 1985, when I broke my neck and became a quadriplegic, they tried to teach me to paint with a stick in my mouth in rehab, and Joni [Eareckson Tada] even visited me while I recovered, but I just didn’t like it, it wasn’t for me. Many years after that, I did two paintings to remember my dog Weaver by rolling my chair through paint and having Weaver walk through paint, both side by side on the canvas, and I found, wow, I can use my chair to paint. So I built a studio and started painting on a daily basis about five years ago. I can’t not paint now, I have to paint every day. So I realized the talent God gave me wasn’t in my hands, the talent was inside me and I just had to find another avenue to let it out.

What is the process of creating a piece?

Tommy: Starts with Masonite boards, quarter inch thick. I have someone prep the boards – adding primary and rolling on a background color. Then I prepare the paint by applying it to my chair and start rolling over the canvas. Sometimes I have an idea in my head, but it might go in a completely different direction. As far as layers, some of the paintings have three, some of them upwards of forty.

What do you judge as the biggest successes of your career? 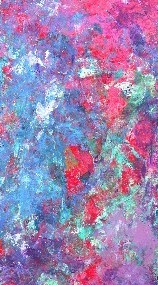 Tommy: Being blessed with solo shows is a big success, but I also asked God to let my mark make a difference, and back in March I was honored with an award by “Shane’s Inspiration.” They raise money to build parks for kids, and two paintings that I donated sold for $10,000 apiece. Also, I was invited back to Boston for a show I was doing for an organization called “Art for Kool Kids.” I was asked to paint with these kids, and a lot of the kids were terminally ill. I was working with a kid who had had brain surgery two weeks before, and I kept asking him what color board he wanted, and he wouldn’t say, until he finally said red, and the supervisor looked surprised and said he hadn’t spoken in two weeks. And right then he started talking, telling me all the colors he wanted to use. Later that night, his mother came and she was crying, and she told me that after he painted, he had walked for the first time after the surgery.

Do you find that people ever focus too much on the process of your art, rather than the product?

Tommy: It goes both ways. A lot of times people don’t know about the process until it’s discussed. When I use the bald tires and I go layer by layer, you don’t see any tracks at all. It’s fortunate they don’t put too much on the process. I would rather them focus on the art, and the process afterwards.

So much of your work is extremely kinetic – how do you channel that energy and why do you think the final product is so motion-heavy?

Tommy: I get it that way through the continuous motion of sliding and moving of the tires. The fluid motion and continuous movement is a freedom to me. It does something to me inside because I feel the movement inside. If I was just painting with my mouth, I wouldn’t get a sense of the motion, or the movement.

Do you ever put things in your work that your viewers don’t see, or, vice-versa, do they see things you didn’t intend?

Tommy: A lot of people see things that I didn’t intend, for sure. That’s true of any abstract art. Some of my paintings I put things a certain way to tell a story. Not many of them, but sometimes God will speak to me. There’s a story behind some paintings. And when I put stuff in there, people will see some of it, but they don’t see all of it.

What painters have inspired you? 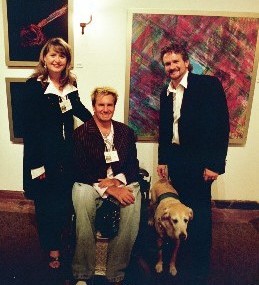 Tommy: [Claude] Monet and [Jackson] Pollock the most. Monet because of the use of color. His “[Rouen] Cathedral” series, I continuously go up to the Getty to see it. His dedication to capture the different times of day and light on the cathedral, it’s just amazing. As far as Pollock, I like his boldness to go after something different. His motion, his continuous motion in the painting, obviously I like that, too.

In what ways have you been inspired by other artistic mediums?

Tommy: I’m real inspired by songwriters, especially praise and worship. I’m always listening to praise and worship as I’m painting. It’s music that really speaks to me. Specifically, I really like music by Rebecca St. James. Sometimes the rhythms help me, but often it’s the words I’m concentrating on. Some of the songs kind of speak to me, remind me of certain things, bring back memories. A lot of my paintings happen when I’m thinking of places I surfed, places I camped, places where God was showing me different things and I was missing it at that moment.

Have you had struggles with the integration of your faith and art?

Tommy: No. I could tell you that if I didn’t have faith, I would have struggles with my art. It’s through my faith and walk with God that my art has gotten more alive. The more time I spend with God, the more I’m into the painting. Especially because the method that I use. I thought I would never paint again after the accident, but I had to tell myself, I can do all things through Christ who strengthens me. So now I cherish every moment that I have to paint.

What about your relationship with God impacts your creativity?

Tommy: Everything. I’m always asking God to show me something in His beauty. I have a pond in my backyard, and I have beautiful butterflies and dragonflies that are attracted to the water, and it just keeps me thinking of God’s beauty. I ask God to continually keep me in awe of His beauty. Everything that anyone has ever painted, landscapes or whatever, we’re chasing after His creation, but we can never get it as beautiful as He’s done it.

How has AEM helped you integrate your faith and your craft?

Tommy: At the event last year, I met some great people, and Mich and Joel are just wonderful. They came to my last show in June, and supported me there. I think it’s an awesome organization, what they’re doing for everyone in the arts. It’s definitely needed.

What advice would you give a young artist?

Tommy: Stay focused on God. Ask for the strength and courage to continue on. There’s lots of negativity out there. There’s lots of rejection, I should say. Before I got my first solo, I must have approached seventy or eighty galleries, but God kept on saying, keep going, keep going. If it’s what God called you to do, don’t let anyone discourage you in any way. That also includes family and very close friends. They’ll try to convince you that art is a hobby, they won’t let you do it as a career. Just keep going.