When did you get started in graphic design? 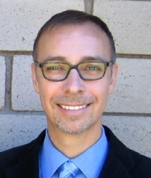 Dwayne: When I was very small, I would ask my mother if we could go to the ballet and the opera. This surprised her. That wasn’t something our family ever did. My older sister would say, “How does he even know what that is?” I was always very interested in art. At an early age I excelled in drawing and painting. I took art classes in middle school and high school. I began to read books about art history. While I was in high school I had a part-time job at a clothing store. The owner was an older man who had a collection of signs and banners from the 40’s and 50’s. He used these to decorate for the holidays and to announce sales. They were beautiful examples of advertising design. In college, I discovered the formal discipline of graphic design. Design was more than just something you did it was a lifestyle of creative, intelligent, meaningful activity. It seemed like a good fit for me.

What equipment/programs do you use? 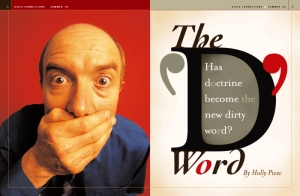 Dwayne: I believe in doing thumbnail sketches. Good design is all about having a strong concept. You can have the greatest computer, but if you lack a good concept you have nothing. So, my primary equipment is pencil and paper.

After that, I use a Mac Pro with the Adobe Design Suite. I also use Quark XPress specifically for designing magazines. Whether a project begins with a sketch, involves painting or photography, eventually everything ends up in the computer.

Do you do other types of art? If so, what kinds?

Dwayne: Yes. I still love to draw. I have a collection of drawings of places I have visited. I also produce very detailed conceptual works that have grown out of my work as a magazine designer. These pieces are about (4’ x 6’) on canvas. Some are produced on paper as well.

I have an exhibition of these large pieces planned for Spring 2009 at a gallery in Berlin. These pieces are mostly abstractions that explore the idea of epistemology, how we know things. I’m working with a composer to produce four vocal works to accompany the exhibit.

Who are your main influences?

Dwayne: I was educated in the Bauhaus philosophy of design. Laslo Moholy Nagi, Walter Gropius, Alvin Lustig, and Karl Blossfedlt were some of my influences. I also have a love of modern art. Modernism in the early stages was optimistic, and there’s an honesty to the very expressive pieces that came later. I enjoy the abstract expressionists. I particularly enjoy the work of Kline, Pollock, Rothko, and Motherwell.

As for designers, I have a great appreciation for David Carson, April Greiman, Chip Kidd, and Fred Woodward. These designers are some of the artists of our time.

What have you been doing recently in your career? 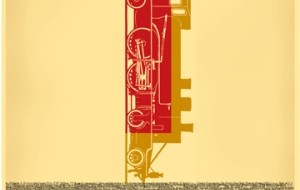 Dwayne: After 20 years in Southern California, I relocated to Charlotte, NC. I have a national clientele so location is not critical for my business. Charlotte is a beautiful, thriving, family-oriented city. People have come here from all over. I believe this is a great place from which to promote my work in New York and Europe.

What accomplishments are you most excited about?

Dwayne: I am very proud of the awards I have won for church logo design. A number of years ago I decided to donate work each year in January, a slow time for my business. I have designed several logos for new church plants which have won international design awards. That gives me joy! I did those projects because I believed in them, and to have them recognized as excellent is a great encouragement.

You have a new blog, tell us about it and your vision and purpose behind it:

Dwayne: My new blog is www.designreligionist.com, “writings on design and religion.” Karl Marx said that there are only three true religions, Capitalism, Communism, and Calvinism. I talk about these as the Economic, the Political, and the Spiritual. Design culture has a lot to say about the first two, but on the third it is virtually silent. There is almost no writing or discussion in the design community about the Spiritual. It’s as if they have adopted a policy of “separation of church and design.” I started my blog to push into this void. I want to bring the Christian Worldview to light for designers. Christianity gives us an intelligent and beautiful understanding of art and design. It informs our understanding of the role of design in society. My readers are nonchristians, and my interactions with the design community regarding the blog have been very positive. I think designers are genuinely curious about religion. Most designers are successful, beautiful, intelligent people who don’t know anyone who is a Christian. The Lord has blessed me with a critically acclaimed career from which to reachout to designers. They respect me first as a designer, and then they are open to my religious beliefs. 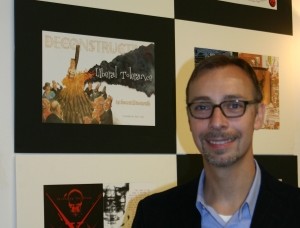 What are your thoughts regarding AEM’s goal of equipping artists and the church to integrate their faith and their art?

Dwayne: Society today wants to sideline religion. The “separation of church and state” mentality has bled over into almost every area of life so that many people think religion has nothing to say to art and culture. This simply isn’t true. We as Christians are called to be culture builders. We are to work and pray for God’s kingdom to be made manifest in the world. This will result in justice, mercy, and beauty. I have great respect for Joel and Michelle. Their heart to reach out to and love artists, and to appreciate their gifts is a valuable and much needed ministry. It is my prayer that their work to integrate Biblical faith with excellence in art will be a powerful force within the church.

Have you had any struggles with integrating your faith and your art? 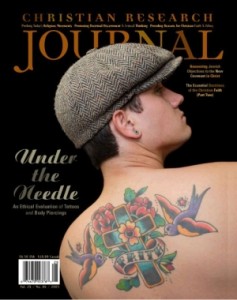 Dwayne: Years ago I read the complete works of Francis Schaeffer, and he kept talking about how the Christian artist is often not accepted by the church. At that time in my life I had not experienced that. Later when I began to art direct the “Christian Research Journal” magazine, I began to receive critical acclaim from the design community. I won many awards, and I received some great honors.

Paralleling this was a steady stream of angry, hateful mail from Christians. I was shocked by the kinds of things people said to me. I was just striving to be good at my art and to create work that mattered so this “hate mail” was a smack in the face. I have a large file drawer full of it! I eventually came to see it as encouraging, though. After all, if the work didn’t matter, no one would get angry. I believe people got upset because the work made them feel emotions they didn’t know what to do with. I was trying to be honest not just make pretty pictures.

I believe that design, especially magazine design, is a performance. It is “action writing.” The reader should feel the emotion and have an experience that leads to realization. A beautiful article should be beautiful; an upsetting article should be upsetting. That’s what I strive for. Nonchristians get it, but some of my bros have a hard time understanding.

Does your relationship with God inform/inspire or limit your creativity? 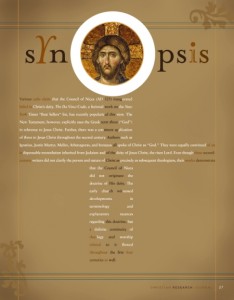 Dwayne: Romans 1:20 says that God can be clearly seen through the creation. The counterpart to Romans 1 is Genesis 1:28. Here we find that man is to create a culture which clearly reveals God. Humanity and Creation are to compliment one another. Similarly, Luther and Calvin during the time of the Reformation sought to teardown a centuries old division between the secular and the sacred. They argued that all of life is sacred. Therefore, making art and being a designer is a spiritual endeavor.

Francis Schaeffer used to say, “God will prove Himself to be true.” Because I believe that God is living, I don’t have to fear those who oppose me. I don’t have to resort to censorship. God’s truth is THE truth. We cannot escape God in art or any other area of life.

What personal spiritual advice would you give an aspiring graphic designer?

Dwayne: First of all, you need to be in the Word. There is no substitute for this. The Bible says that faith comes by the Word and the Spirit. Also, there is something special about the preached Word. “Hearing” the Word is very important. All artists should attend church where the Word is faithfully, deliberately preached.

Also, if you’re going to be a designer you have to take it seriously. Excellence is not optional. You must strive to be the very best you can be. Really good designers have really high standards. This profession will not tolerate excuses. Be prepared to “bring it!” Now, there is a line that Christians have to be careful not to cross. Don’t bow to the god of design. There are lots of designers who worship design. It’s all they’re living for…and, they’re divorced. Don’t sacrifice your health or your family.

I know this can be a challenge. Hear me when I say that I used to work 80 hours per week. I know about the pressure, but seek the Lord. He will make a way for you.

What practical business advice would you give to an aspiring graphic designer? 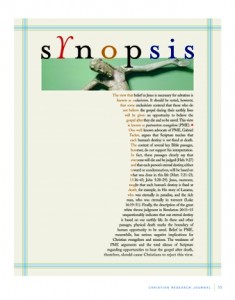 Dwayne: The greatest asset a designer has is intelligence. Graphic design by definition is the design of words so to be a good designer you must READ. The most inspiring thing to my work as a designer is the book club that my wife and I have hosted for 12 years.

We read only literature written within the last five years. We choose from lists of books nominated for prestigious book awards. These stories help me to understand the embodiment of ideas. They create an experience for me. Design is a similar endeavor so I can learn from one to be better at the other.

Also, all of the arts share the same principles so reading art history, going to museums, attending concerts, as-well-as staying up on what’s happening in design is very important.

What struggles do you face as an entrepreneur? Any advice to someone who wants to open their own design firm? When should they, what are the risks? How has this affected your walk with Christ?

Dwayne: The biggest struggle I have experienced in business is cash flow. You can be sailing along making money, and one client can put you in a bad way. Late payment especially when you are carrying expenses can be very difficult.

Also seeking new clients and projects is something you must do constantly. You can’t wait until you need the work. Business is relationships and new ones take time to foster.

A book that every designer should have and use is the GRAPHIC ARTIST GUILD HANDBOOK. For prices and procedures, there’s no better guide. In addition to this, I would recommend BUSINESS BY THE BOOK by Larry Burkett. This is a book that explains Christian responsibility in business. If every believer practiced business like this the world would really take notice.

Dwayne Cogdill is the principal creative director at St. Dwayne Design in Charlotte, North Carolina. He has received more than 60 international design awards. His work has been recognized by Communication Arts, EPA, How magazine, Print magazine, the Society of Illustrators and the Society of Publication Designers. His work includes some 20 annual reports as-well-as corporate identity for Universal Studios and branding for Disney. His work has been included in exhibitions in New York, Los Angeles and Europe.