Does Our Ambition as Artists Honor God?

Home / Does Our Ambition as Artists Honor God?

Share on TwitterShare on FacebookShare on PinterestShare on LinkedInShare on Email

Does Our Ambition as Artists Honor God?

Ambition can lead us to do things that are selfish and wrong, and to accomplish great goals, but when does our ambition as artists honor God? This question must be answered if we are to pursue our calling and our gifts with passion. We need to know when it will honor God, so that we can pursue it with a clear and holy conscience.

“Intelligence without ambition is a bird without wings.”
– Salvador Dali

Without ambition and drive, an artist will never follow their ideas or develop their imagination the way they need to. The artistic process is fraught with too many obstacles. Without ambition and drive, you will be defeated by the obstacles and fail to achieve your goals. As Henry Ward Beecher stated, “A man without ambition is like a beautiful worm–it can creep, but it cannot fly.” Henry was the brother of Harriet Beecher Stowe, who wrote Uncle Tom’s Cabin, and used her talent for writing to stir people to fight to end slavery in America. All great work requires endurance, and endurance is secured by ambition and commitment to see it through.

Ambition and The Cultural Voices

Ambition is one of those words loaded with cultural baggage and negative connotations. I have had friends from Central America tell me that all ambition in their culture is seen as evil because it always entails pushing other people aside in order for you to get ahead. They equated success with cheating, lying and manipulating in order to get ahead.

When I lived in New York, ambition was the highest compliment you could give someone. It may be a city of opportunity, but only for those who work the hardest, the longest, and with the shrewdest business practices. Ambition was admired and rewarded. It has taken the puritan work ethic to such an extreme that the puritans wouldn’t recognize it. In such a culture, the sabbath is no longer sacred to many, and work becomes all consuming.

How does our faith interact with this idea of ambition? When we come to God, and rest upon his love and grace, it must impact our sense of ambition. When we realize life is not about our personal egos, it should also influence our view of ambition. James warned us about people who possess, “bitter jealousy and selfish ambition” (James 3:14). The Apostle Paul warned us of people with desires that became their gods (Phil 3:19) and the danger of loving money (1 Tim 6:10). Yet, Paul shares with us his “ambition to preach the gospel, and start new churches instead of building on another man’s foundation.” (Rom 15:20)

It is clear from the Bible that there are both godly and selfish ambition. The question is not whether we should be ambitious, but whether our ambition is a healthy and godly ambition.

What we see in the New Testament is how the Apostle Paul was transformed, not only from persecuting Christians to inviting people to become Christians at all costs, but his very ambition was redeemed. His ambition to be the most religious, and the most zealous of the Jews, was transformed by God’s grace.

Once he met Jesus and his eyes were opened, his ambition was now to share this radical love and grace in as many cities as possible, and to glorify God with every ounce of energy he possessed. This is godly ambition. It is ambition anchored in a strong desire to honor God in all things.

The Struggle of Ungodly Ambition

The first king of Israel lost his throne and was judged by God because of ungodly ambition. Though he was anointed king; he followed his own desires and his own ambition. God had called him to go to war, with specific instructions to kill the king of the Amalekites, and not to take the spoils. Saul started off doing what God commanded, but then took matters into his own hands. He did not kill the king and kept some of the animals and the spoils. For this, he lost his role as king, and was judged by God. (1 Samuel 1:24-25)

There is always a temptation in the art world and entertainment industries to follow our heart’s ambition for personal fame, financial success and the applause of the crowds. We can go to church and have a heart to worship him, but when the real temptation comes, do we chose what serves our ambition or what serves God.

Some call themselves Christians and are sincere as deep as they understand their faith, but they have not integrated their faith with their creative endeavors. They have quarantined their faith and allow their artistic and vocational ambition to drive their career and their life. It is only a matter of time before they are forced to choose between the two. King Saul is the model of what we should avoid in these circumstances.

The Beauty of Ambition Redeemed

In the New Testament, God had a plan for the apostle Paul from the beginning. The religious zealot young man became Paul, only after his ambition was redeemed by the Holy Spirit’s work. God saw that Paul’s life began with ambition to be the most fervent and religious follower of the Jewish Law. He sought to honor God with his mind and his behavior. He focused on the law, and was so zealous that he killed Christians for heresy and betraying the laws of Israel as he understood them.

Jesus, had compassion on Paul, and chose to redeem his passion, his mind and his ambition. With a blinding light, Jesus knocked Paul to the ground, and asked him, “Why are you persecuting me?” (Acts 9:4), and through the miraculous events in Acts 9, we see how God redeemed Paul.

With a redeemed ambition, consider how Paul tells the Philippians, “I have learned the secret of being content in any and every situation, whether well fed or hungry, whether living in plenty or in want.” (Phil 4:12) Paul can say this because he has learned that contentment flows from Godly ambition. If our ambition is for our own comfort, we will be upset by discomfort, but when our ambition is to glorify God, we are able to endure hardship and suffering because we know it will be used for good. This is why he was content in any situation.

Godly ambition is present when our heart longs to honor God, in all situations. With such ambition, God can and will use you greatly. Such a woman or man is powerful in the hands of God to fulfill his purposes. It is not easy to remain focused on honoring God, but with the help of the Holy Spirit, we have hope and confidence that we can grow in our ability to align our ambition with the goals of God for our life. As Paul later wrote to his dear brothers and sisters in Phillipi, “He [God] who began a good work in you, will be faithful to complete it.” (Philippians 1:6). May your ambition be motivated by the Holy Spirit and directed by the love of Christ.

Questions on Your Calling as an Artist? Check out the Free Artist Calling MasterClass HERE 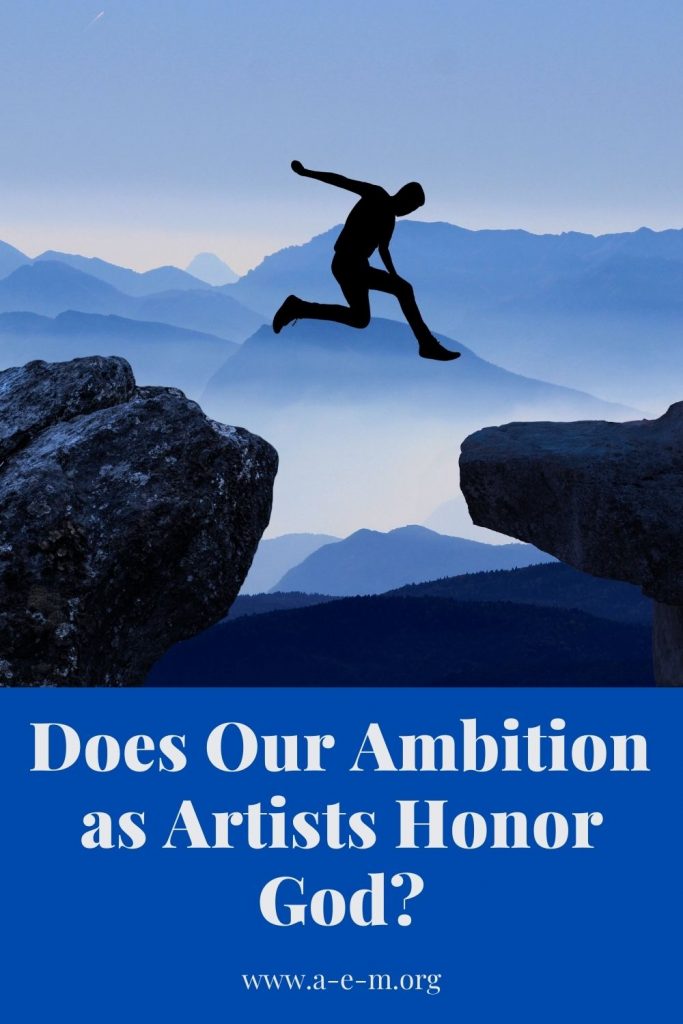 Share on TwitterShare on FacebookShare on PinterestShare on LinkedInShare on Email

2 comments on “Does Our Ambition as Artists Honor God?”