If art is to be embraced as self-expression, and a safe arena within which to explore ideas, we must recognize art as free speech. This means that we must defend the freedom of all artists and creatives to produce works that represent their viewpoint, not matter how absurd we perceive it to be. As in the words of Patrick Henry, “I may not agree with what you have to say, but I will defend your right to say it, to the death”.

If we embrace art as free speech, we must agree by saying we may not agree with the ideas communicated through all the art produced today, but all artists should equally defend the right of other artists to express their own beliefs – no matter their political, religious, or personal content. Sadly, this idea has lost its footing. Such is the irony of those who burn American Flags (because there is no such freedom in North Korea). They are embracing their First Amendment rights by expressing hatred in a way that affirms the very benefits of the country they are living in. Everyone is quick to push for their own voice to be heard, but the unique contribution of our Constitution is that it allows for all voices to be heard.

Free Speech, Art and the Constitution

Thankfully, the idea of “art as free speech” is part of the very fabric of our constitution and our culture in America. Whenever audiences are offended, or censors threaten to restrict offensive movies, Hollywood always invokes “free speech” and the First Amendment. This is legitimate legally in America, as a result of the 1952 case of Burstyn vs. Wilson. Art is a form of expression, and as such it is protected by the First Amendment. There are still restrictions upon obscenity and violence, because of the respect for the innocence of children and the appropriateness of such art in the public square. This is the reason for our rating systems for mature audiences, R-rated movies, PG, and so on.

Free speech is embraced in Hollywood to be sure, where all kinds of satire, subversion and sexuality are celebrated in the form of storytelling. It is part of what keeps things interesting. Hollywood may mock the religious, the irreligious, the conservative, the liberal, or any other group they share disdain for, and they are protected under the law. Movies are also free to portray violence of all kinds, and even if they do inspire violent people to do violent things, they are protected under the First Amendment. This is the price of free speech. For everyone to possess such a freedom, there will always be those who use those freedoms to offend, mock, and express hatred toward others and their values. But we must not flinch. Freedom is too precious.

Free speech is embraced in museums throughout the world, where they have exhibited sexually graphic art, as well as art by murderers of children. In 1995, artist Marcus Harvey created Myra, a portrait of a child murderer Myra Hindley, who killed five children between the ages of 10 and 17 in 1963 and 1965. The real offense was discovered in the process- the portrait was entirely made of children’s hand prints. It caused tremendous outrage, as it should. Some threw eggs on it the first day it was exhibited. As disturbing as such art is, and as much as I personally see no legitimate need to ever exhibit such art, it has been made possible by the categorization of art as free speech.

People must be free to create religious art and anti-religious art (including the placing of feces on Mother Mary by Ofili, as offensive as that is to Christians). If you are unfamiliar with that work, here is a Catholic response: https://www.catholicleague.org/art-critic-wants-virgin-mary-defiled/ .

Free speech in music has been embraced as free speech more and more over the last several decades. I remember in the 80s when musicians faced censorship over selling music with curse words. The debate made it all the way to Congress. The lead singer of Twisted Sister argued under free speech that their CD’ was protected. Congress ruled against musicians with obscene lyrics.

Ironically, when the law finally passed requiring albums with explicit lyrics to have a warning sticker on the CD, Dee Snyder of Twisted Sister found himself wanting to thank Congress. His sales went up astronomically! Sadly, emerging artists then saw this as an easy way to sell their music – make it shocking. . .get the “explicit” sticker on their CD and it will sell even more.

Free speech has been a hot topic especially in the Hip Hop and Rap genres. From bands like N.W.A. and solo artists like Ice-T, to Tupac Shakur there have been numerous court cases about freedom of speech and obscenity laws. No matter how you evaluate these issues, free speech is at the heart of the right of musicians to write and produce unique music with a unique viewpoint. Again, I may not agree with the lyrics they write, but I’d rather live in a culture where all artists are free to create the art they want to create, (even though I may have serious concerns) than a world where such creativity is controlled by the state.

Freedom is not free. It is not easy. It comes with responsibility. A culture can only survive if we maintain a respect for one another. Regardless of the laws, we are bound to love our neighbor and respect those we disagree with. We must still fight to protect the weak, the young, the orphan and the widow. One area of concern is that Hollywood has promoted the sexualizing of children in the name of “art.” Natalie Portman spoke openly about the devastating impact of such sexualizing of young women in the entertainment industry. Also, the USC Annenberg study  demonstrated how Hollywood is “hooked on sexualizing young women.” The impact is profound because this Hollywood “culture” is exported throughout the world. We cannot throw our hands up and stop showing concern for the impact of art.

Laws never create a moral culture. But where the law is limited, we must stand up for the abused, the oppressed and the vulnerable in our own arena of the art world or the entertainment industry. Christians have a higher standard in their art production. We should be asking far more than, “is my art, or the art I’m involved with legal as free speech,” and should also be asking, “is this loving my neighbor.” We are called to not only honor the laws, but to always seek to love the “neighbors” we work with and the “neighbors” who are our audience.

The Dangers of Activist Art

This is where so much activist art fails the basic gospel litmus test. Too much of activism today is demonizing their neighbor in the process of seeking justice, instead of loving their neighbor as they seek justice. For in fact, Christ tells us that if we hate our brother, we are in serious spiritual danger and have abandoned the heart of the gospel. Consider these words of Jesus,

Our culture has imbibed the toxin of self-righteousness, and embraced hatred of others. Christians cannot be a part of this and continue to claim to follow Christ.

The Danger of Bias

One of the greatest dangers to such freedom is when any industry becomes so homogenous that they begin to exclude anyone who does not embrace their views. This may not be by design, but the consequences are the same regardless. In such a situation, censorship doesn’t occur after the art is created. Instead, other voices are eliminated on the front end by being excluded by gatekeepers who don’t want to support other viewpoints.

I have met activist show runners and script reviewers for networks who actively seek to block any Christian content even being considered for their networks. This is what happens when you have activists in positions to accept or reject scripts, musical artists, art installations, grants, etc. It is acceptable because of the homogeneity of people in a particular part of the art world or entertainment industry. This is what so much of Hollywood and parts of the art world have morphed into.

It is only a matter of time before such echo chambers and cultural bubbles breed self-righteous attitudes leading to disgust with other perspectives and then, eventually, hatred of all opposing views. This is human nature and it is part of the cause of cancel culture – self-righteous intolerance bred by hatred of the other. In such a world, there is no love of neighbor, no nuance, no understanding, and no deep cultural conversations.

Leaders in the art world, Hollywood, the music industry, and media companies have embraced the idea of censoring and banning artists instead of celebrating our heritage of free speech. The freedom they benefited from is now taken for granted, as they ostracize, criticize and demonize people with views they do not share.

Now, they seek to destroy careers and eliminate social media platforms if you do not support the political party they embrace, if you voted for the “wrong” candidate, or if you don’t endorse their approach to climate change. The litmus tests seem to multiply each year. Groups that once celebrated free speech, now destroy it, day after day. The freedom of speech they used to promote, is forgotten. The foolishness of this approach is they assume their friends will always be in power and such tactics will never be used against them, but the cancer has taken hold.

Returning to Free Speech and The Gospel

The question remains today, “Can we recover from such divisiveness, hatred, and demonization of the people with whom we disagree?” The answer is not found in our culture. It is not found in fighting back using the same vitriol and hatred.

It is only found in the gospel, because only Christianity calls people to love their neighbor, and even to love their enemy. If there is something we have to offer this bitterly fought, hate-filled culture, it is the love of Christ and the desire to humanize those with whom we disagree instead of to demonize those with whom we disagree. This does not mean we ignore the issues and overlook the evil being done. It means we love others even as we seek to correct what is wrong, oppose what is evil, and restore what is broken.

We need to understand the times we live in, to hold fast to the Gospel, and to discern how we can show the love of Christ to others. We must resist the temptation to just adopt the views of the world in the name of peace, or ‘getting along’. We also must resist the temptation to fight back in anger. We must find the way to love others even while we may disagree with them, maintaining biblical convictions.

Our hope is not in our efforts. It is not in our ability to persuade. Our hope is in God, who holds the hearts of men and women in His hand, and who can bring reconciliation and hope to our culture as we walk in obedience to Him.

Let us know your thoughts about the censorship of art in the comments below! Do you agree with the notion of art as free speech? 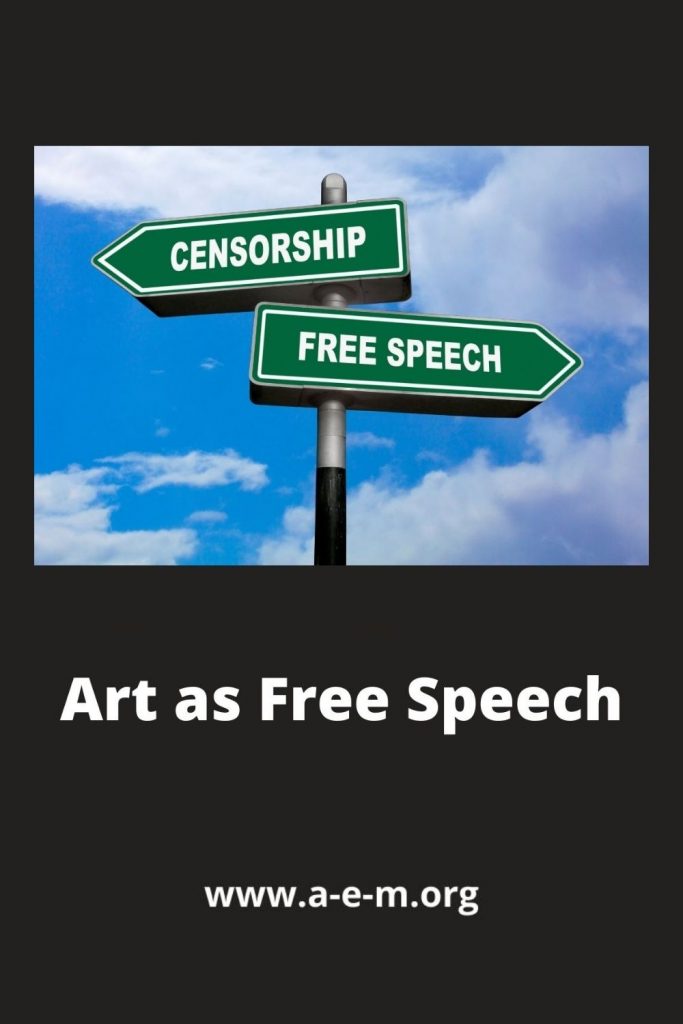 6 comments on “Art as Free Speech”